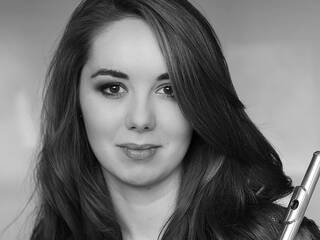 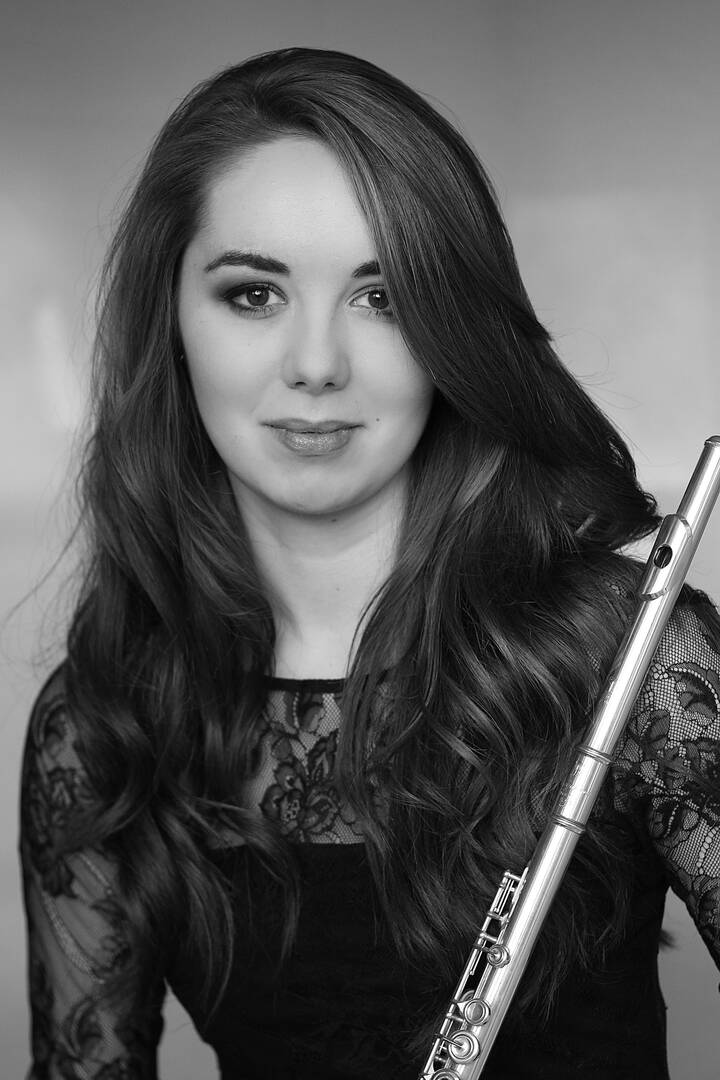 Charlotte Ashton graduated from the Royal Academy of Music in 2015 with first-class honours and the Principal’s Prize, where she learned flute with Clare Southworth, Karen Jones and Samuel Coles, and piccolo with Sophie Johnson and Helen Keen. Her formal musical training began at the Junior Academy of the Royal Academy of Music, aged 11, before joining The Purcell School for Young Musicians in 2008. She was made an Associate of the Academy in 2018, recognising outstanding contribution to the industry.

In 2016, Ashton was appointed Principal Flute in the BBC Scottish Symphony Orchestra and has enjoyed the opportunity to explore a huge range of orchestral music, from core repertoire to the more unusual. Equally at home in the ranks of the orchestra as she is at the front of the stage, she performed Boulez’s Memoriale at the Edinburgh International Festival under Matthias Pintscher in 2016 and, more recently, recorded Bernstein’s Halil with John Wilson for broadcast on BBC Radio 3. She also recorded James MacMillan’s Remembering for solo flute, one of 20 Postcards from Composers for solo instruments, commissioned by the BBC and featured on Radio 3, written and recorded remotely under lockdown during the Covid-19 pandemic.

As a soloist, Ashton won the 2015 Royal Over-Seas League wind, brass and percussion finals and is the recipient of numerous awards, including Making Music’s Philip & Dorothy Green Award for Young Concert Artists, the Royal Academy of Music’s Chris Taylor Flute Award and the Harold Craxton Memorial Trust Award, as well as being supported by The Countess of Munster Musical Trust. She has given recitals in venues across the country, such as St John's Smith Square, St Martin-in-the-Fields, Wigmore Hall and Colston Hall. 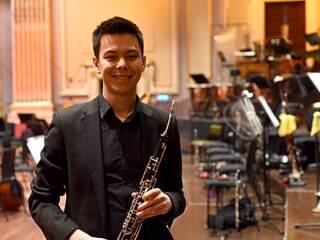 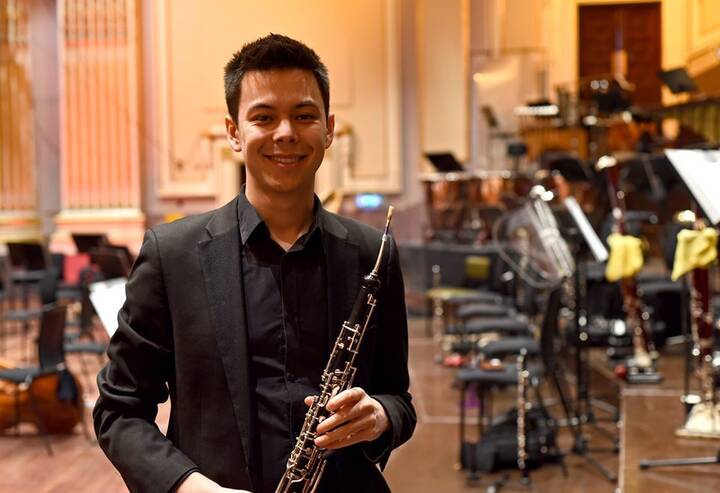 Henry Clay is currently Principal Cor Anglais with the Royal Scottish National Orchestra. He graduated with a postgraduate degree from the Royal Academy of Music in 2016, where he studied with Christopher Cowie, Sue Böhling and Melanie Ragge. Prior to this, he attended the Royal Northern College of Music and the University of Manchester on the Joint Course under the tutelage of Jennifer Galloway and Hugh McKenna.

A passionate chamber musician, Clay is also a member of the Cavendish Winds quintet with fellow Academy alumni. They were finalists in the 2016 Royal Over-Seas League Annual Music Competition and were Open Academy/Wigmore Hall Learning Fellows in 2016/2017. The group have also been a part of The Tunnell Trust for Young Musicians and Making Music programmes, and have performed recitals across the country in venues such as Wigmore Hall, St Martin-in-the-Fields and Kings Place. 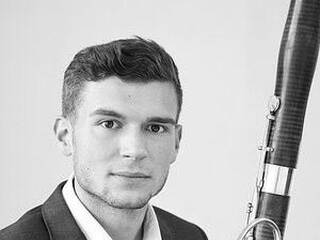 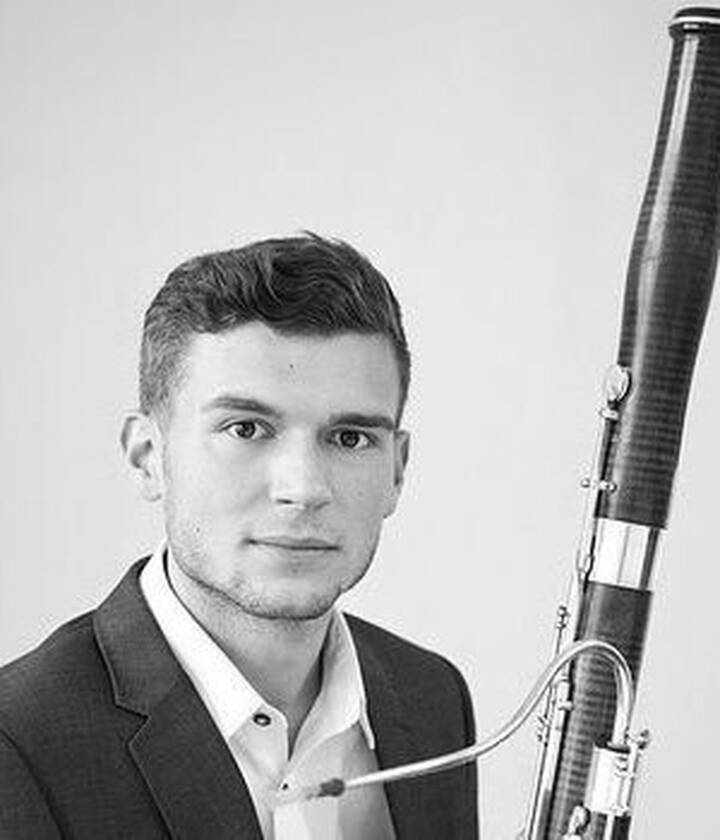 Jonathan Davies is one of Britain’s youngest leading bassoonists. He was appointed Principal Bassoon of the London Philharmonic Orchestra in 2016 under Vladimir Jurowski, with whom he also recorded the Mozart Bassoon Concerto in 2017. Prior to joining the LPO, he held the same position with the Royal Philharmonic Orchestra from the age of 22 alongside regular appearances as guest principal with the UK’s leading orchestras and ensembles.

Since making his London Concerto debut at the Barbican Hall aged 13, further solo highlights have included Haydn's Sinfonia Concertante alongside Maxim Vengerov, Elliot Carter's Retracing for solo bassoon in the Purcell Room and a world premiere by David Fennessey with the London Sinfonietta. In 2017 he recorded Mozart’s Sinfonia Concertante as a soloist with the London Philharmonic Orchestra and Jurowski alongside the Mozart Bassoon Concerto.

Jonathan studied at the Royal Academy of Music under the tuition of John Orford, Amy Harman and David Chatterton, supported generously by the ABRSM and Sir Elton John Scholarships and graduating with the HRH Princess Alice The Duchess of Gloucester's Prize. Born in 1992, Jonathan began his studies in South Wales with Robert Codd. He is currently Visiting Professor of Bassoon and an Associate of the Royal Academy of Music. 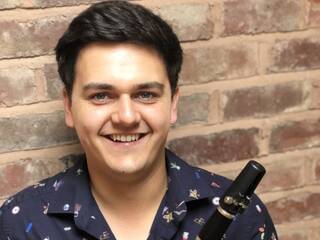 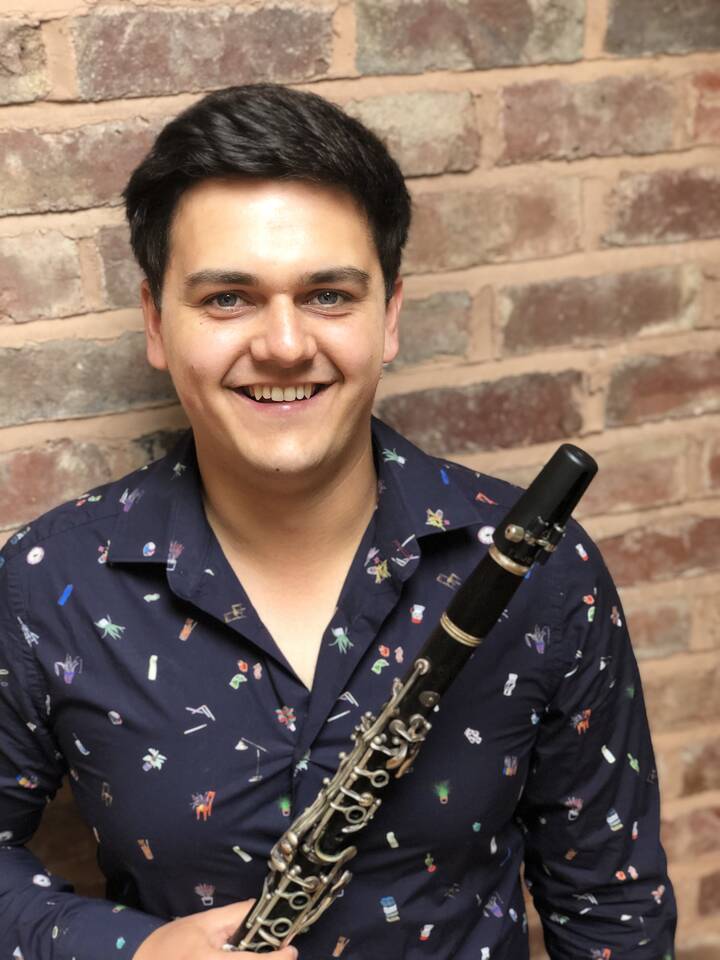 Oliver Janes is currently Section Leader Clarinet with the City of Birmingham Symphony Orchestra (CBSO). He was born and brought up in Manchester and started his musical life learning the violin before taking up the clarinet at the age of fifteen. His grandfather, John Fuest, had been Principal Clarinet with the CBSO and Royal Liverpool Philharmonic Orchestra (RLPO) and convinced Oliver to give the instrument a go. The rest is history!

After two years of lessons with his grandfather, he went to Chetham’s School of Music to study with Rosa Campos-Fernandez. He followed this with four years at the Royal Academy of Music studying with Mark van de Wiel. At the age of twenty-three, Janes was appointed Section Leader Clarinet with the CBSO. While enjoying the variety of the CBSO schedule, he frequently appears as guest Principal with many of the UK’s leading orchestras, including the London Symphony Orchestra, John Wilson Orchestra, London Philharmonic Orchestra, Hallé, Philharmonia, Aurora Orchestra, RLPO and BBCNOW. With a keen interest in contemporary music, he plays with the Birmingham Contemporary Music Group, with whom he has recorded numerous CDs, toured internationally and performed some of the clarinet’s most challenging repertoire. As a soloist, he has performed works by Debussy, Mozart, Strauss, Copland and Brian Ferneyhough’s La Chute d’Icare.

Janes plays on a pair of Buffet DG clarinets which were passed down to him from Angela Malsbury during his time at the Academy. 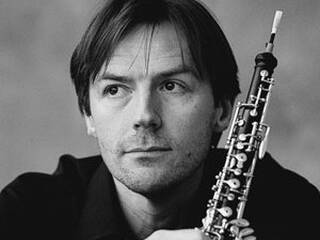 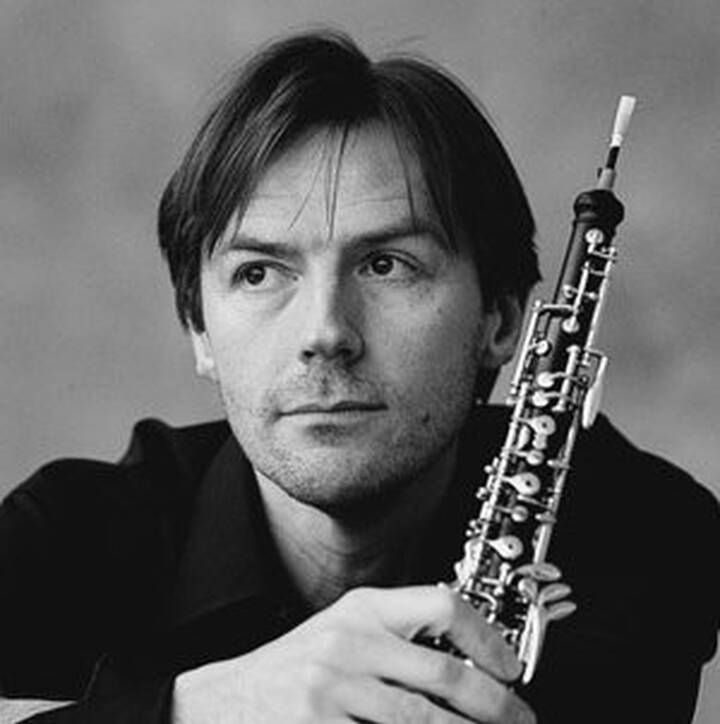 Jonathan was born in 1969 and educated at Magdalen College School, Brackley, Northants, UK. He won a County Music Scholarship which enabled him to study with Helen Armstrong. While at school he played in the National Youth Orchestra and later in the European Community Youth Orchestra where he was the first recipient of the Mick Baines Award.

He studied history at Cambridge and then oboe with Celia Nicklin at the Royal Academy of Music where he won the President’s Prize. Further studies were undertaken in Paris with Maurice Bourge. 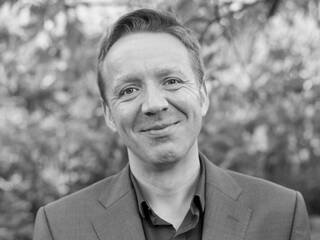 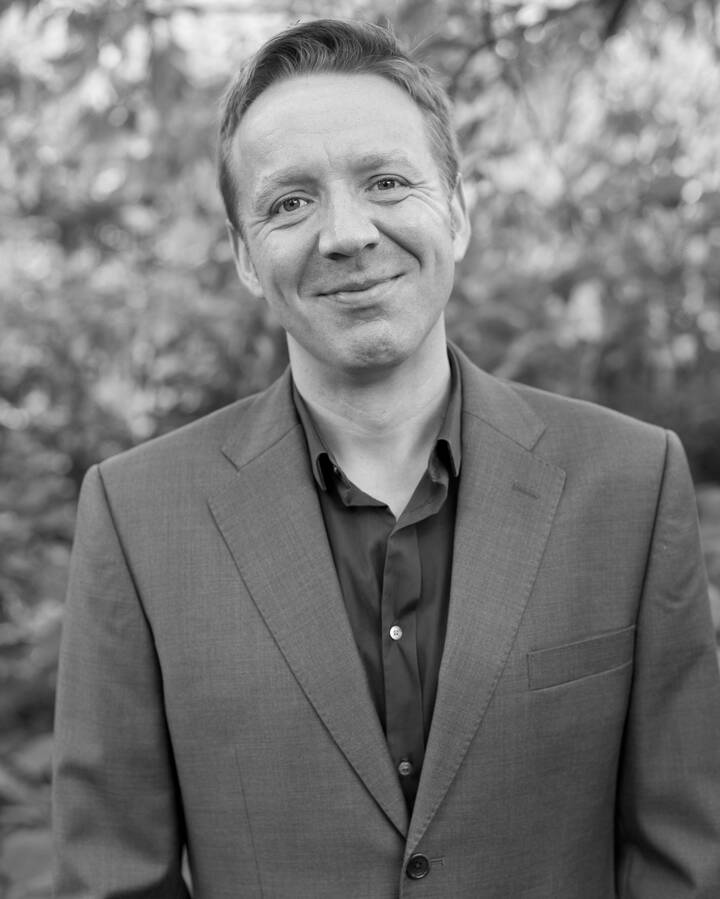 Described by Neue Muzikzeitung as ‘the Jamie Oliver of animateurs’, Paul Rissmann enjoys a varied career which includes composing music, talking about music and inspiring others to make and perform their own music. He currently holds the positions of Animateur with the London Symphony Orchestra, Children’s Composer in Residence for Music in the Round and Creative Partner of the Adelaide Symphony Orchestra.

Paul is a passionate music educationist whose projects has been acclaimed by the Royal Philharmonic Society and Royal Television Society. In 2014, he appeared as creative director in a Channel 4 documentary Addicts’ Symphony, which explored how music can be therapeutic in overcoming addiction.

Frequently commissioned to transform children’s literature into symphonic scores, Paul won a British Composer Award in 2012 and was nominated for an Ivor Novello Composer Award in 2020. His diverse portfolio of compositions includes an orchestral suite inspired by Alice in Wonderland, a setting of the New York Times bestseller What Do You Do With an Idea?

Paul creates and performs bespoke orchestral events for people of all ages which range from full-scale concerts for the under-5s to a critically acclaimed series of music discovery concerts for adults called Naked Classics. He has guest-presented Classics Unwrapped for BBC Radio Scotland, dissected the world of opera for Glyndebourne in Behind the Curtain and performed a series of open-air classical concerts with the LSO in London’s Trafalgar Square.

In 2013 Paul was made an Associate of the Royal Academy of Music. 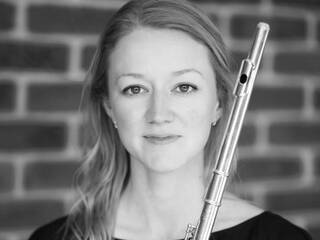 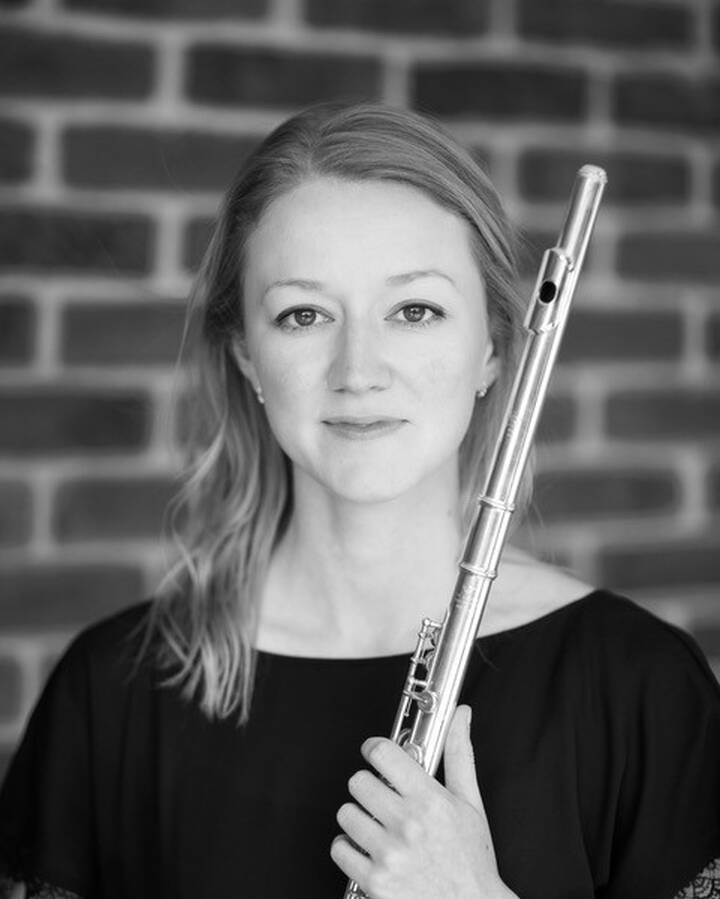 Amy Yule studied for her Master’s degree at the Royal Academy of Music, where she learned the flute with Michael Cox and Karen Jones as well as the piccolo with Pat Morris. She graduated in the summer of 2017 with distinction as well as several prizes, including the Chris Taylor Flute Award, Jonathan Myall Piccolo Prize, Woodwind Finalists’ Prize and the HRH Princess Alice The Duchess of Gloucester’s Prize. In 2016, Yule also won the Academy Patrons’ Award and performed the resulting recital at Wigmore Hall with pianist Seungwon Lee. Prior to this, Yule studied for her undergraduate degree at the Royal Northern College of Music with Laura Jellicoe, Jo Boddington and Richard Davis. Her studies were generously supported by the Associated Board of the Royal Schools of Music and the Martin Musical Scholarship Fund.

While studying at the Academy, Yule participated in several orchestral projects, including the side-by-side scheme with the Philharmonia Orchestra. During her final year of study, she was offered the position of Principal Flute with the Royal Northern Sinfonia, which she held for two years before taking up the same position with The Hallé. She has also recently appeared as Guest Principal Flute with the Philharmonia Orchestra, Academy of St Martin in the Fields, London Philharmonic Orchestra and London Symphony Orchestra.

Chamber music was another subject Yule was able to explore and, while at the Academy, she joined the Moriarty Winds quintet. The ensemble enjoys delivering a variety of performances and educational workshops around the country and its members were Chamber Music Fellows at the Academy for the 2017-18 academic year. Yule’s chamber music engagements also include performing at Lars Vogt’s Spannungen festival in Heimbach and working with Ensemble 360. As well as chamber and solo commitments, she enjoys engaging with young musicians and has recently worked with students at Leeds College of Music, Durham University and both the National Youth Wind Orchestra and the National Youth Orchestra of Great Britain.