This video shows the ending to Rzewski's epic, one-hour set of variations on the famous Chilean revolutionary song: a series of stylistically unique variations, expertly performed by Academy pianists Julian Chan, George Fu, Mihaly Berecz and Harry Rylance. This concert was from our Autumn Piano Festival, held at the Angela Burgess Recital Hall in 2019.

This concert was from our Summer Piano Festival, held at the Angela Burgess Recital Hall in 2019.

We are pleased to be presenting a whole term of livestreamed concerts this Autumn. Our Autumn Piano Festival on 13 October 2020 celebrates 250 years of Beethoven, showcasing this repertoire alongside 20th century pieces and contemporary music by Edmund Finnis and Tansy Davies. Browse our full season at: ram.ac.uk/events 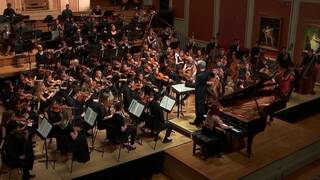