Supported by longstanding Academy donors Joseph and Jill Karaviotis, this year’s competition featured eight final-year RAO students vying for the grand prize of £9,000 with a runner-up prize of £3,000.

The winner of the 2021 Pavarotti Prize was soprano Josi Ellem, who performed Handel’s ‘Dunque i lacci d'un volto... Ah! Crudel’ from Rinaldo and Massenet’s ‘Il est doux, il est bon’ from Hérodiade. Second prize was awarded to baritone Patrick Keefe with ‘Yeletsky’s Aria’ from Tchaikovsky’s The Queen of Spades and ‘Rivolgete a lui lo sguardo’ from Mozart’s Così fan tutte. 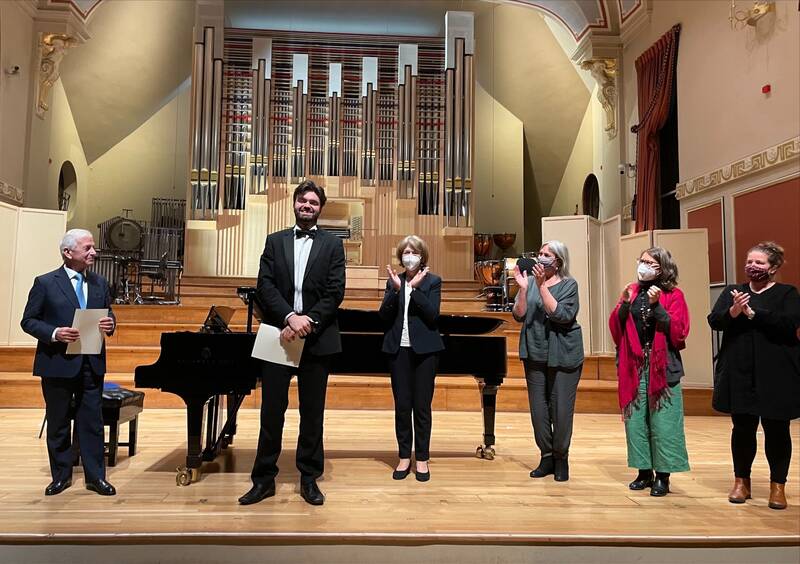 Patrick was thrilled to have received the runner-up prize of £3,000 and wrote to Joseph and Jill Karaviotis to express his gratitude:

‘Thank you very much indeed for your generosity in supporting the Pavarotti Prize at the Academy. These past few years have been difficult for many musicians, and for those of us still honing our craft, it has been hard to support ourselves while also dedicating ourselves to the study of our art.

‘Your support not only provides us with the opportunity to relieve some of this financial pressure, but also facilitates an environment of healthy competition and enterprise that encourages us to become the best young singers we can be. I am sincerely grateful to you for being a consistent bastion of support for young artists, and I very much hope to have the chance to perform for you again.’

Josi Ellem previously studied at the Sydney Conservatorium of Music, where she earned the highest mark ever awarded to a vocal student for her final recital. She is grateful for the support of the Jennifer Vyvyan Award and Henderson Scholarship.

Josi’s operatic roles include First Witch in Dido and Aeneas, Puck in A Midsummer Night’s Dream, Sandrina in La finta giardiniera, Countess Almaviva in Le nozze di Figaro, L’enfant in L’enfant et les sortilèges, Zerlina in Don Giovanni, Papagena in Die Zauberflöte and Fiordiligi in Così fan tutte. She has won the Demant Dreikurs Award twice, and the Sydney Eisteddfod’s German song, French song and Soprano first prizes. She was a finalist in the IFAC Handa Australian Singing Competition in 2019. She was the soprano soloist in the City of Sydney’s annual performance of Handel’s Messiah at Sydney Town Hall in 2018 and the soprano soloist in Mozart’s ‘Great’ C minor Mass, K 427, with the Sydney Conservatorium Orchestra in 2017.

Patrick Keefe is studying with Mark Wildman and Jonathan Papp. Prior to this he studied at the Guildhall School of Music & Drama with Robert Dean and Peter Robinson, and at the University of Oxford, where he completed a BA (Hons) in Music and a Master’s in Music Theory and Composition, which he passed with distinction. At university, he was a choral scholar and, later, the Peter Phillips Scholar in the Choir of Merton College.

With Royal Academy Opera he has recently enjoyed performing the roles of Aeneas in Dido and Aeneas, Demetrius in A Midsummer Night's Dream and Guglielmo in Così fan tutte.

Patrick is an Opera Prelude Young Artist, and is grateful to have had his studies supported by the D'Oyly Carte Memorial Award, Fordyce Award, Behren's Foundation and Help Musicians UK Sybil Tutton Award.